By Alison Rooney for The Highlands Current, originally published on June 3, 2022.

How did you decide on this year’s shows?
We knew it would be our first season in our new home and wanted to give it a memorable and joyful kickoff. Typically, we start with a Shakespeare comedy — not always, but that’s been an anchor: summertime, open air, comedy. But Shakespeare wrote many comedies, and it’s like a pitching rotation, and the one coming back around might not be right for starting a new era. So, we asked what non-comedy could be a tent-pole.

We quickly arrived at Romeo and Juliet. But it is so familiar and best-loved, the challenge is, what’s going to distinguish it? Ten years ago, Chris Edwards directed Carl Howell and Angie Janas in Romeo and Juliet, and the actors fell in love and got married. It’s hard to top that.

What do you have planned?
At our HVSF gala last fall, we honored Kurt Rhoads and Nance Williamson, who have both performed for 20-plus seasons at the theater. One person wrote that they were like Rosalind and Orlando [in As You Like It] meeting in the forest, where they taught each other how to play. They are star-crossed in the best sense: They kind of cracked the code.

We thought, “What would it mean if we cracked the code, and abandoned those ages and casting types most associated with those characters?” The prologue tells you everything that is going to happen. So in this way the play enlists the audience, alongside the actors, to imagine the world of the play rather than the kind of theater that presents you with a version of reality. 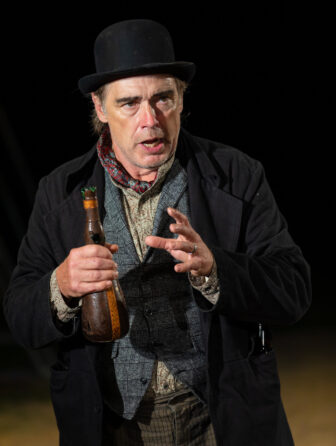 How did Kurt and Nance react?
They laughed. And they were puzzled, and curious, and ultimately excited. There was a recent New York Times article on the characteristics of happiness, and people who are happy were described as often having playfulness, connection and flow, all of which are characteristic of Kurt and Nance, so it felt like this was a recipe for good theater and good partnership.

People have asked if all the younger parts will be cast with older actors, and the older with younger. No. Each actor cast by [director] Gaye Taylor Upchurch was cast for his or her own essence. You meet them all as a kind of chorus in the prologue, and they step into the story.

Though it attracted much attention when it debuted in 2012, it’s likely many audience members won’t be familiar with Mr. Burns, a Post-Electric Play, which you’re directing. It begins with a group of people trying to maintain some sort of stability after a series of nuclear meltdowns by retelling a Simpsons episode. How does it connect to 2022, and to Romeo and Juliet?
We had talked about Mr. Burns in past seasons but hesitated. In 2012 it might have felt like a futuristic sci-fi proposition borrowed from Stephen King’s The Stand. But it’s different now. Because of the global trauma we’ve experienced, it could be happening the week after next.

As in Romeo and Juliet, the story moves through time and media, and each successive generation has new ways of slipping into it. The Simpsons, probably more than anything else, is constantly alluding to other stories. It feels like fair game when [playwright] Anne Washburn says, “I wondered how a story would change after an apocalyptic event.” Often people imagine that world as unrelentingly grim, with no possibility for hope and beauty. Those are the questions Anne is playing with.

The third act of the play, which features music by the late Michael Friedman, is not just about survival, but resilience. Audiences have to stay through the second intermission to find the payoff, but it’s profound. Britney Simpson, who played Ariel in The Tempest last year and the Baker’s Wife in Into The Woods a few years back, is playing Bart Simpson in the third act — it’s going to be amazing. 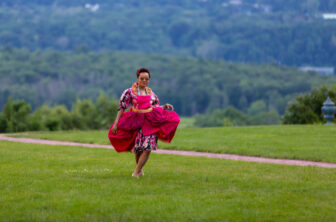 Britney Simpson, seen here in a 2019 production of Cyrano, will play Bart Simpson this summer. (Photo by T. Charles Erickson/HVSF)

How about Where We Belong, the third production?
It’s a one-person play by Mohegan playwright and actor Madeline Sayet that is directed by Mei Ann Teo. It’s about Madeline’s journey as an artist and her lifelong relationship with Shakespeare and with settler colonialism. It feels like it’s a crucial and important conversation for us, as a theater company moving to this land in the heart of Lenapehoking country. The show is going around the country to theaters like The Goodman [in Chicago], Seattle Rep, the Public Theater [in New York City]. Our production runs Aug. 13 to 22. We’ll be doing lots of auxiliary programming, working with Indigenous writers, writing about land and colonialism in the Hudson Valley.

Any other changes we can expect?
We’re still doing things audiences love, particularly picnics, including the first picnics catered by The Garrison. Or you can book a reservation in the restaurant for before the show. On weekends, the World’s End bar will be open after the show, and, who knows, you might find some cast members there.

HVSF is located at 2015 Route 9 in Garrison. Its 2022 season begins on July 7 with a week of previews. For tickets, which range from $10 for obstructed views to $95 for center front, see hvshakespeare.org.