Meet the Young Local Talents in this Season’s ROBIN HOOD

One Saturday in February, dozens of kids from all over the region auditioned for the roles of Sarah and Jethro Summers in this season’s THE HEART OF ROBIN HOOD, bringing an energy and youthful creativity we don’t often get to feature at the Theater Tent.

“We decided to cast two actors for each part so that we could schedule around family commitments and vacations,” HVSF Artistic Director Davis McCallum shared. “The show must, as they say, go on.” 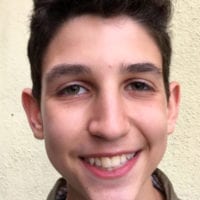 We caught up with our “Kid Company” on a warm spring day at everyone’s favorite local ice cream shop, Moo Moo’s Creamery, to hear about their lives inside and outside of the rehearsal room — and what it’s like to work with some of their favorite HVSF actors:

In this adaptation, Robin Hood starts out as kind of a jerk, right?

Adam: Yeah, but I think it’s cool that he falls in love with somebody that changes his heart and makes him believe he can do better things. Like, he can help people who need it. It reminds me of Harold Hill in The Music Man. Harold starts out as a con artist; he fools everyone to give him money and as soon as people get suspicious he runs away to the next place. But he also falls in love and learns to take responsibility for everything he’s done. He comes clean about everything and becomes a good person…

You know a lot about The Music Man! That’s a great show.

Adam: I played Harold Hill once.

Sam: I was in that show too, but I played some guy who owned a horse stable.

Do you have other dream roles in mind?

Adam: Tony or Riff in West Side Story.

How about productions you’ve seen at the HVSF Theater Tent — any favorites?

Adam: I really enjoyed The Liar and The Three Musketeers. There was a lot of sword fighting that – when I was younger – was so magical to me.

Talia: I really liked last year’s Twelfth Night! I’d like to be the girl who dresses up as a boy… what’s her name? [It’s Viola] I saw it last year with my friend Una and when that man who played Sir Toby Belch poured a cup of water but pretended to be peeing… me and Una played tag and ran across that spot on the ground and I was like, “you stepped in the pee!” What’s it like working with actors you’ve seen on stage before? Is it weird?

Phoebe: It doesn’t phase me.

Adam: My first day, it felt like, I can’t believe this is happening. I’ve seen these people every summer and now I’m in the production with them! But Jose and Colleen [2018 Conservatory Company members] both came over and introduced themselves right away. That was really nice of them.

Has it been tricky to learn an English accent for the play?

Sam: We were given a recording of our lines – just our lines, no one else’s – by the vocal coach [Alithea Phillips] and it was so funny at first. I’d just hear random lines like “get awaaay from me, yuh stuffed goose.” [The kids laugh.] You couldn’t piece the script together at all!

Phoebe: I play Sarah and she doesn’t have that many lines, so…

Talia: What Phoebe said! It’s hard to be the girl that doesn’t say anything for most of the show. I HAVE A BIG MOUTH!

What else about the summer are you excited for?

Talia: I’m excited for August because I’m going to the Wizarding World! But I just like all the months, really. Plus I get to go to Shakespeare Summer Camp and Camp Combe, and I don’t have to go to school.

Phoebe: I’m excited to swim. And I’m going to Shakespeare Summer Camp, too!

Aside from the ice cream at Moo Moo’s, what are some of your favorite summertime snacks? Where should our audiences grab a bite before they come to see your play?

What would you study if you had all the time in the world?

Adam: Music for sure. I’m in a band with my siblings and a family friend, The Solar Sound Band. We have an EP out.

Phoebe: I love science! I take an afterschool class about robotics every Monday and it’s so much fun.

Talia: Social studies for me!

What should people outside of rehearsal know about the show or the rehearsal process?

Adam: It’s almost like a workshop. People are suggesting things all the time – the actors and actresses. The director adapts with them, and it’s really fun to watch.

Talia: Plug the Dog’s costume is going to be really cool!

Sam: I think they need to know just how amazing Wes Mann is. He’s, like, amazing. Me and my friend spent a whole period watching his Back to the Future 2 clip. He plays CPR Kid.

[Talia proceeds to sing a little ditty she makes up about Wes Mann on the spot.] Keeping it in the Family

Phoebe’s father, Ray Bokhour (above right, holding Phoebe’s hand), joins the creative team for this summer’s community-driven production of RIP VAN WINKLE as Composer/Music Director. Below, photos of a younger Adam as Robin Hood in his school production of The (Absolutely) True Stories of Robin Hood, written, produced, and performed at The Academies at Gerrard Berman Day School in Oakland, NJ, where he’ll graduate this year.