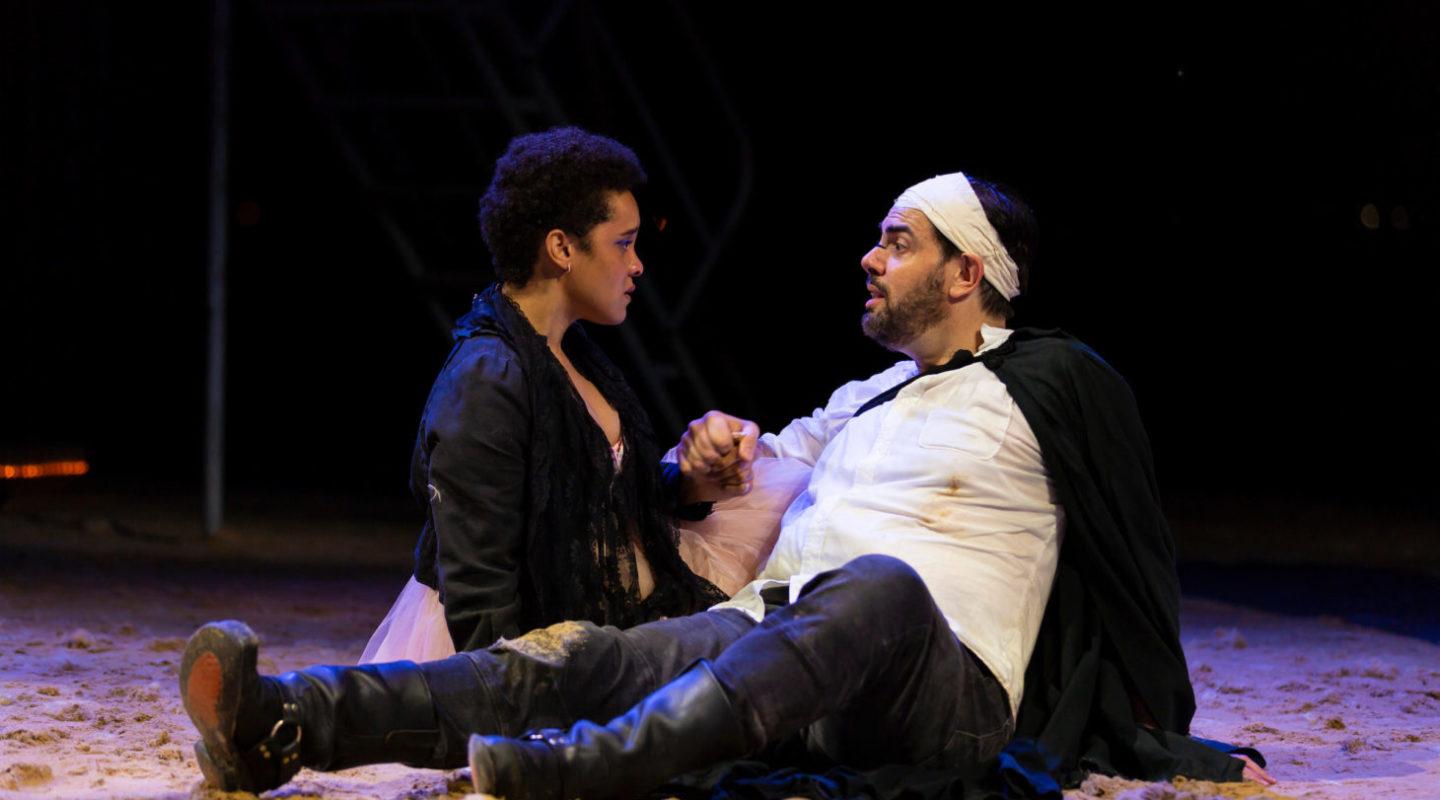 CYRANO co-authors Jason O’Connell and Brenda Withers discuss the process of tackling Edmon Rostand’s unabridged text. The pair focused on keeping the classic moments and breadth of the story while collaborating to create a tight script. The resulting production is an exhilarating combination of heart and wit. CYRANO runs through August 30, with direction by Meredith McDonough.
Get Tickets

HOW DID YOU COME TO ADAPT ROSTAND? WHY CYRANO?

JASON O’CONNELL: The idea actually came from an artistic director friend in Texas – Amphibian Stage’s Kathleen Culebro Anderson. She was interested in hiring me to direct a small-cast version of Cyrano, but she didn’t have a specific script in mind. There was one built for three actors (which I believe Brenda is also familiar with), but it seemed awfully slight… more of a children’s theatre version than anything. We began to discuss other existing scripts, and then Kathleen suggested a new adaptation. I said “Great, but who’s going to write it?” She replied, “What about you?” I had never done anything quite like this before, and we were only four months away from production! I told her it sounded like a tall order, and that’s when she suggested I co-write it with Brenda. The bizarre thing is that Kathleen had no idea Brenda and I knew each other, much less that Brenda has been one of my closest friends for nearly 18 years now! So, that’s how the project began, but I’ve loved Cyrano ever since I saw the movie “Roxanne” as a kid, and I know Brenda has had a history with the play as a performer…

BRENDA WITHERS: It’s true! I’ve worked on Cyrano twice as an actor, both times in pared-down versions of the original. As the proliferation of small-cast adaptations suggests, Rostand’s unabridged character list (it spans two pages in the version I have) is a huge hurdle for most contemporary theater companies. Adapting classics is about keeping powerful stories relevant and accessible– aesthetically, thematically, and even economically. No matter how ambitious a company is– and Kathleen’s vision for Amphibian is truly outstanding– most can’t afford to run year-long programming and produce a 5-act, 50-actor epic. Our adaptation was born of happy necessity, and our suggested pairing the happiest accident– two old friends tasked with making a timeless story new.

TELL US ABOUT YOUR PROCESS. WHAT SORT OF RESEARCH DID YOU DO? DID YOU USE A PARTICULAR TRANSLATION?

O’CONNELL: Well, I watched “Roxanne” again – just kidding (though I do think the contemporary humor and sweetness and hopefulness of that version permeates my take on the story to a degree). We both knew and loved the story but definitely wanted to make sure we were working from the purest, fullest version of Rostand’s text that we could. As luck would have it, Brenda is fluent in French, and – had there been more time – would have done her own translation of the play. As it so happened, she was able to find an English language version of the text that was incredibly close to the French original.

WITHERS: I knew that being familiar with the play as an actor would be both a blessing and a curse– once you’ve performed a translation, it’s hard to get its rhythms and phrasing out of your body, so I made a special point not to return to the versions I’d appeared in and instead work directly from the French and Brian Hooker’s almost literal translation. Since we knew we’d be reinventing much of the text to suit our small-cast vision, we felt comfortable relying on Hooker’s version as a foundational resource in terms of detail and plot. Checking in on the original French gave us the chance to reimagine certain turns of phrase without departing from the intended spirit. Both texts were essential to us remaining loyal to Rostand’s creation.

WHAT DO YOU REMEMBER ABOUT THE CO-WRITING? WHERE YOU IN THE SAME LOCATION OR DID YOU COLLABORATE REMOTELY? ANY PIVOTAL MOMENTS IN THE PROCESS YOU’RE WILLING TO SHARE? MOMENTS OF AGREEMENT? ANY PLACES WHERE YOUR WRITERLY INSTINCTS DIVERGED?

O’CONNELL: The main thing I remember is that it was an incredibly fast process and that it never stopped feeling like an insane proposition! We never wrote in the same room because our other commitments as actors kept us apart. Instead, we would tackle sections or scenes or moments we were particularly passionate about and then send them to each other for review. We were so fortunate in that our voices really melded and mixed pretty organically. We were certainly tweaking and editing, blending our styles as we went — but we were really in sync throughout.

WITHERS: I think the creation of the framing device was pivotal, but the lightning-bolt moment for me was when we first came together to discuss our approach. We showed up at a coffee shop – or was it a wine bar? – with our previously taken notes about Rostand’s massive original text and realized that we agreed on just about everything – what to minimize, what to enhance, which characters to combine, which to eliminate, the images we wanted to accentuate and the themes we wanted to focus on. Sometimes the observations were so similar and specific, it felt like we were sharing a brain. It was the moment that told me this was going to not only be possible, but that it could be special.

I remember us each pulling out our photocopied, footnoted, dog-eared copies of the text and it slowly dawning on us that we’d highlighted and struck through so many of the same passages– where J had drawn an exclamation point, I’d drawn a heart; where I’d dropped a question mark, he’d dropped two. From the start we were in organic agreement about what should stay and what could go– I’m sure some of that was born of our long friendship and shared appreciation for a certain style of theater, and some inspired by the specific task of turning a sprawling classic into a 5-actor romp.

JASON, HOW WOULD YOU DESCRIBE WORKING WITH BRENDA? WHAT IS HER AESTHETIC?

O’CONNELL: She has Integrity with a capital “I”… She is a great lover of literature and poetry and – in terms of adaptation – has the utmost respect for the source material she works on. Her writing is such a delightful combination of playfulness and precision. She’s sharp, funny, efficient and clear. I couldn’t admire her more if I tried. She not only makes me want to be better, she actually makes me better!

BRENDA, HOW WOULD YOU DESCRIBE WORKING WITH JASON? WHAT IS HIS AESTHETIC?

WITHERS: Despite being one of the funniest people on the planet, Jason is dead serious about beauty and truth. His remarkable sense of play (which I know HVSF audiences have enjoyed for years) is matched only by his effortless command of language (ditto)– that combination is so magical in his performances, and translates just as beautifully to his writing. He’s unafraid to bust convention if it means breaking through to more people (including his co-writer!) and his pursuit of the beating heart at our story’s center was a constant touchstone. Jason likes adventures where everyone’s invited and I couldn’t be more grateful to have been along for this ride.

IN ADAPTING, WHAT DID YOU THINK YOU COULD AND COULDN’T CHANGE? DID ANYTHING FEEL SACRED?

O’CONNELL: Nothing is all that sacred to me, so Brenda keeps me grounded! Kidding (kind of). You know the saying “If it bends, it’s funny. If it breaks, it’s not funny”? It’s kind of like that. There’s a point at which, if you change too many elements (or too great an element) of the story, it ceases to resemble or possess the properties of the thing you’re adapting. So I think we had an innate sensitivity to that as we worked on the play. At what point is it no longer “Cyrano”? At what point is it “Roxanne”? As long as it’s not changing the thrust or the arc of the original story, I think it’s okay if, for example, Roxane is Cyrano’s childhood friend and not his cousin… Or that she shows up on the battlefield with a modest parcel of herbs instead of a storybook feast – in both instances, she’s lifting the soldiers’ spirits and bringing them a (literal) taste of home.

WITHERS: Jason hits it spot on– an adaptor always wants to stay true to a piece’s source material, but has to decide when to prioritize the spirit of a text over its letters. That was our greatest challenge (and, when met, greatest pleasure). Rostand’s original breaks your heart in so many ways because it’s about so many different kinds of love– there’s romance, there’s family, there’s friendship, there’s the appreciation of the cosmos and tradition, good deeds and good turns of phrase. It’s a love letter to life itself. In addition to keeping the quintessential moments– the balcony scene, chief amongst them– it seemed important to maintain the breadth of the play’s story, even as we distilled it down to a tighter package. I’m pleased we were able to add dimension and dignity to characters that have been treated as foils in other versions– the Duenna, Sister Marthe, even Roxanne, and Christian got a little boost in terms of pluck and perspective. I hope it’s the way Rostand (and Cyrano) would have wanted it.

YOU’VE MENTIONED THAT ALTHOUGH THE PLAY WAS FIRST STAGED IN TEXAS, IN SOME WAYS IT WAS WRITTEN WITH THE HVSF TENT IN MIND. WHAT IS IT ABOUT THE TENT THAT HAS INFORMED YOUR PROCESS AS WRITERS/ADAPTORS?

O’CONNELL: Well, I said that at the first rehearsal here, but that wasn’t Brenda’s perspective, per se, as she hasn’t worked at HVSF before. For my part, though, the bold theatricality needed to make a 5 person Cyrano work – the imagination and irreverence and big, open heart the endeavor requires – are all things that remind me of the HVSF tent.

WITHERS: The first time I set foot under the tent, I knew we’d hit upon a jackpot in terms of atmosphere. The moon is amongst my favorite (silent) characters in the play, followed closely by the night sky, the evening breeze, the sweet smells of the French(ish) countryside– there’s no substitute for an audience being able to see and feel the very things your characters are rhapsodizing. HVSF’s setting inspires as it humbles, which I think every good play should do, too.

YOU’RE ON TO SOMETHING GREAT! WHAT’S NEXT FOR YOU TWO AS A WRITING DUO?

O’CONNELL: I would work with her anytime, anywhere, on anything… Kindred spirits are hard to come by in this business and I’m excited to figure out what’s next.

WITHERS: The obvious follow up to a small-cast Cyrano is a five-act Pinocchio, but we haven’t settled on that just yet.