Much Ado About Nothing

Benedick and Beatrice trade barbs and match wits under the Theater Tent:

Scandal abounds in Shakespeare’s hilarious, biting comedy about lies, courtship, and the chaos created in pursuit of true love. The famous bantering lovers, Benedick and Beatrice, trade barbs while matching wits (and hearts) in this celebrated romantic romp.
Explore the Story

Prince Don Pedro’s army makes a triumphant return home from the war. Benedick and Claudio, two of the prince’s soldiers, visit the home of Duke Leonato for a celebratory masked ball. Claudio falls for Leonato’s daughter, Hero, and the prince agrees to woo her in disguise on his behalf. Claudio and Hero’s marriage is soon arranged.

Hero’s cousin Beatrice and the dashing Benedick, on the other hand, are fiercely opposed to love, swearing off marriage and railing against courtship in all forms. The two resume their long-waged war of wits, and as insults fly, Benedick and Beatrice’s friends hatch a plot to trick them into falling in love with each other.

Meanwhile, the prince’s misanthropic brother Don John hatches a plot of his own, leading Claudio to believe that his beloved Hero has been unfaithful on the eve of their wedding. At the ceremony, Claudio publicly denounces her and she faints amid the chaos. Leonato and the Friar agree to fake Hero’s death, and Beatrice demands that Benedick avenge her by killing Claudio.

A bumbling constable and his watchmen uncover Don John’s malicious trick, and the conspiracy is exposed. To make amends, Claudio promises Leonato that he will marry one of Hero’s cousins in her place. As the couple approaches the alter, one final deception leads everyone to a fresh understanding of the truth.

Much Ado About Nothing was written between 1598 and 1599. Elements of the play, such as the Hero-Claudio plot, were likely drawn from Greek, Spanish, or Italian romances, or from earlier English works.

Much has been written about the multiple meanings of “nothing” and “noting,” which would have been pronounced similarly in Shakespeare’s day. “Noting” can refer to gossip or overhearing — which plays a pivotal role throughout the play, leading to betrayal and renewal (in Hero’s case) and love (in Benedick and Beatrice’s case) — or the written word, as Leonato instructs Claudio to lay a hand-written statement on Hero’s tomb proclaiming her innocence.

This pamphlet was created by Caitlyn Halvorsen, 2019 Education Intern

This activity packet was created for family night by Caitlyn Halvorsen, 2019 Education Intern

Can I read the play before I arrive?

You can read the play in its entirety here!

Is this show appropriate for my children?

Much Ado About Nothing includes playful discussion of adult courtship and references to infidelity. Although every family’s tolerance for grown-up themes is different, we believe this production is appropriate for school-aged children. Little ones under 5 should stay home.

How can I learn more about the play?

Join us for our pre-show Friday Night Prologues series or a post-show Talkback with actors to learn more about the work under our Theater Tent. Learn more about our 2019 Special Events here.

What’s the style of the show?

Productions under the Theater Tent usually incorporate contemporary music and dress because we believe creating pathways for audiences to make personal connections to the text is vital. Much Ado’s style of music and costume design are loosely rooted in 1950s America.

How long is the show? Thou and I are too wise to woo peaceably.

Benedick, Much Ado About Nothing Act 5, Scene II Little Red, Ensemble (INTO THE WOODS); Ensemble (MUCH ADO, CYMBELINE) Jack, Ensemble (INTO THE WOODS); Ensemble (MUCH ADO, CYMBELINE) 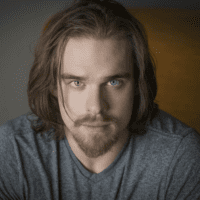 Steward, Ensemble (INTO THE WOODS); Ensemble (MUCH ADO, CYMBELINE)